Our iögo and Michaels projects honoured here and abroad!

CASACOM has just won four major awards in Québec, Canada and the United States for the Ultima Foods iögo launch and the entry of Michaels stores into Quebec. These are recognitions that inspire us to take on new challenges! 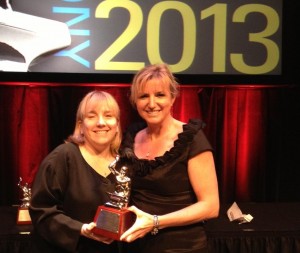 The awards season ended with a big win for us and our client Ultima Foods as we took home the prestigious Silver Anvil Award of the Public Relations Society of America (PRSA) for the iögo campaign on June 13. Our expertise has been recognized in the category Reputation / Brand Management – Business under $500M. Annick and Carolyn were in New York on June 13 to receive this honour that only a few Canadian firms have ever received. Two days before in Ottawa, CASACOM won the bronze award in the category Canadian Media Relations Agency Campaign at the CPRS National Awards of Excellence.

For Michaels Stores introduction into the Québec

During the same ceremony, we won a gold award in the category Canadian Marketing Communications Campaign of the Year for our program for the entry of Michaels stores in Québec. Finally, on May 30 in Montreal, CASACOM received a platinum award in the category External public relations campaign at the SQPRP (Québec Society for PR Professionals) Prix d’excellence awards. Our project was the only one that received a platinum award, which means that we got the highest marks.

How long does it take a company to completely turn around? The Ultima Foods yogurt company had the Yoplait licence in Canada since 1971. In 2011, the situation changed when General Foods acquired Yoplait. Ultima Foods then decided to create, develop and launch its own yogurt brand, iögo. Beyond this great launch of products well known to everyone since August 2012, Ultima Foods, a 100% home-grown business with community values, has been discovered by Canadians. The positive media coverage reached 97 million impressions; something unheard of for the launch of a new brand in the food and beverage category. The results on social media were also impressive, including the 1.5 million views on Twitter during the first month. The iögomania clearly manifested itself, amongst other things, through the engagement of the consumers on the interactive platforms and the brand continues to resonate positively everywhere. As evidence, the iögo market shares stood at over 10% just three months after the launch while its brand awareness across Canada reached 80%. To know more about iögo’ launch, read this press release and this post.

In fall 2010, Michaels Stores decided to extend its brand to Quebec, with a view of building a roadmap for further global expansion. After a competitive RFP process, we were chosen as its partner to create a best practices scenario that could be replicated around the world. Our role was more than simply public relations. It was about creating a strategy that would enable Michaels to embrace the hearts and minds of Quebecers, while helping a sophisticated business model adapt to a unique market. When Michaels decided to enter Quebec, it knew that respect and meaningful adaptation were paramount. In CASACOM, the Michaels team sought a facilitating partner who would play a major strategic role in establishing their presence in Quebec. On September 14th, 2012, after two years of counsel and preparation, Michaels successfully opened seven stores simultaneously in Quebec. Today, CASACOM is still Michaels’ partner as the company pursues its expansion in Quebec. The total media reach exceeded 55 million, neutral or positive, which is impressive for Quebec. Not a single negative article was published. The microsite contest received more than 25,000 unique visitors and close to 6,000 French-language Facebook friends. The successful entry of Michaels in Quebec is a template for best practice and since this time, CASACOM has been called on to share its expertise with others. To know more about this successful program, read this post and watch this short video.