As part of my internship at Oxenstierna & Partners,  in Stockholm, I had the chance to experience Midsommer. In a few words, it is the Swedish version of our Saint-Jean-Baptiste, a party where family and friends gather in the countryside to celebrate the summer solstice. Some Swedish natives told me that Midsommer is even more important than Christmas! 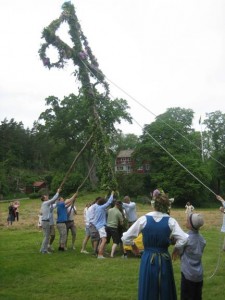 Now that I took part in the celebrations, I fully understand why. When we arrived in the countryside where the celebrations were held, everyone participated in the decoration of the Maypole, a huge cross crafted with tree trunks. Symbolically, this represents a phallus fertilizing the soil for crops (seriously!). Before planting the Maypole in the ground, it has to be decorated and covered with leaves and flowers. Two floral wreaths must also adorn the Maypole.

When the decoration is completed, men and women use their strength to proudly plant the cross in the ground with ropes and rods – it’s pretty impressive!

At this moment, the party gets started! People of all ages participate: songs and games around the Maypole. Even though I do not understand the language, I participated in all the games, like the frog and the carousel one.

After the songs and many games, it’s time to eat! Potatoes, pickled herring, chives, sour cream and salad are traditional dishes enjoyed by Swedes. For dessert, we had delicious strawberries and not to mention beer and snaps, where it is customary to take a sip after each drinking song – I must confess there were several! 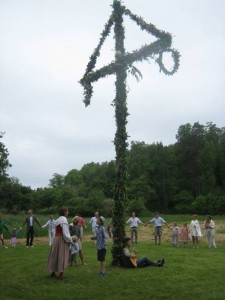 I had such a great time! Did you know that in Sweden, daylight is present for only three hours a day in the winter? Some cities in the northern parts of Sweden are completely immersed in the dark for several days! Considering this, it’s easy to understand why it is so important to celebrate summer in all its glory.

PS: Thanks to Anna and her family for welcoming me as one of their own, a true Swede.