Have you ever thought about including Canada in your business’ growth plan? CASACOM has welcomed several foreign brands in Canada over the last few years in both its Toronto and Montreal offices. All of those brands have benefited from an integrated PR program and have since seen their income grow. Beyond the lucrative currency exchange rates we are currently seeing, here are 8 reasons to expand in Canada in 2016.

Diversification reflects the realities of changing consumer tastes and evolving business opportunity.By expanding into Canada, alternate sources of revenue open up for a business, making it more resilient to changes in the domestic market.

For the eighth consecutive year, the World Economic Forum has professed Canada’s banking system to be the soundest in the world. According to Forbes and Bloomberg, Canada is the best country in the G-20 to do business.

From 2005 to 2014, Canada led G-7 countries in economic growth. It also provides a market worth a combined gross domestic product of $38 trillion, or nearly one-half of the world’s output of goods and services.

By expanding into the Canadian market, businesses have the chance to increase output with lower variable costs. This can benefit their profit margins, cut down production costs and make them more competitive in the domestic market.

Total business tax costs in Canada are by far the lowest in the G-7 and 46 percent lower than those in the United States.

Expanding internationally is vital in order to remain competitive. Choosing Canada is a logical first step due to its geographical proximity. Canada also offers a competitive R&D environment, with the lowest business costs in the G-7 for R&D-intensive sectors, with a 15.8 percent cost advantage over the United States.

Canada’s workforce is the most highly educated among members of the Organisation for Economic Co-operation and Development (OECD) as half of the working-age population has a post-secondary education.

8. Great place to live and work

Canada is one of the most multicultural countries in the world, with a universal healthcare system, clean and beautiful landscape and outstanding universities. The OECD’s Better Life Index shows Canada as best in the G-7 in terms of overall living conditions and quality of life.

At CASACOM, we can help grow businesses in Canada. Contact us if you wish to discuss this further. 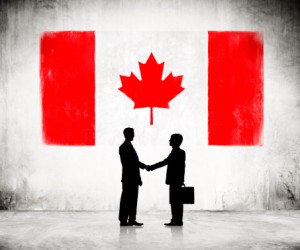